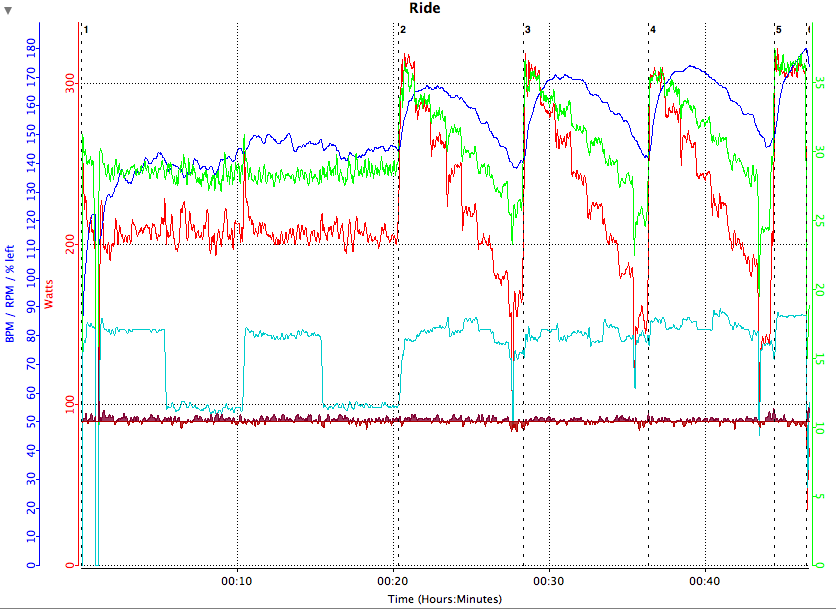 Above is my latest bike session. Not long and not too tough but effective enough I believe.
I read a study about reverse power profile; that is starting at your highest power and stepping down. The study stated that persons could ‘beat’ their VO2 max figures by performing the test backwards. It might seem intuitive that this is the case since the effort gets easier every minute, but in the case of the study, more work was performed during a given time. I’ve been trying to find the reference but am so far without look.

Assuming the study is real I designed this set based on that premise; more work can be performed with a step-down test. Extending this theory to the training principles – more work builds more fitness.

Looking at the numbers, the theory seems sound.
I got my highest average power for a long time – if ever.

No pain this morning… well, that’s a lie. I had major pain in my shoulders from the strength training set yesterday. The foot though is great; not even the slightest sensation. To celebrate I was going to go out and run again but I will rest instead and take it tomorrow.
Sauna is on and I’ll take a beer afterwards.

I have been pain free for three days now so I decided to attempt a run. The doctor advised me to run when I feel no pain and somehow I managed to wait an extra three days. This is uncharacteristic for me but I think it illustrates the fear I’m carrying regarding this injury.
I did feel something on a couple of occasions during the run but nothing that I could classify as pain. Just now as I type I feel a crawling sensation on the dorsal foot, around the metatarsals… strange but not pain. The injury being soft tissue in nature means that I have to wait until tomorrow before I declare myself fit or otherwise.,, Eight hours and counting.

As for as the actual run, it went well. I ran the Ursvik 10km at a pretty easy but steady pace. JUst getting the legs moving again. A couple of hours before the run I also did a 20 minute home strength session. Mainly focusing on upper body and core with no rest between exercises – pretty difficult and I think I will pay for it dearly tomorrow.

The possibility of having two things in the post for the morning.

I attempted the churches loop again tonight and once again came in short. The wind was less favourable than it was on the first two attempts and I believe that I would have succeeded had the conditions been similar. That is irrelevant because I want to be able to go out on any given day and do the lap in under an hour.

Today I decided to hit the hills a little harder and see what happened. For each of the hills I let the power go to around 240-270w and then tried to settle straight back into 200-210w at the crest of the hill. I expected the average vs Normalised Power relationships to show this but it seems that they are relatively the same:

I went very hard for the last seven minutes of the lap, showing that I had plenty left at the end. So, it seems that I don’t need a PM to analyse the solution to the problem: Pedal a little harder!
That is just what I will do next time.

Tonight I attempted the three churches loop again. It was very windy as I left the house so I didn’t think it was possible to beat the hour. My goal was simply to try hard and not give up. Another thing worth noting was that I adjusted the front end on the tri bike. There were no more spacers to take out so I tilted the tri bars upwards a couple of centimetres and in doing so lowered the pads by a centimetre. This got me lower but I did feel a little discomfort initially. I’m assuming a little time heal this discomfort since the metrics from the ride showed no negative effects of e position change. If it was an unworkable position I would expect that my HR would be high relative to the power but tonight the power vs HR curve was similar; in fact the HR was lower for a given power than it was in the old position.

Anyway, rant aside, I started out with a predominantly assisting wind and was holding a good speed. As the ride progressed the wind started to die down so it was shaping up to be good conditions for breaking the hour. At the turnaround I assumed that I would grind to a halt as I battled the headwind but it wasn’t actually that bad. Approaching the garage I was tired but I thought there was a chance of breaking the hour. I dug deep and went Beverly hard one last two inclines… Even harder in the last descent… Only to cross the stockholm sign in a time of 1:00:23. 36km/h average speed. 36,15m/h is is what is necessary to break the hour.

I’m going to try it again n Thursday or Friday and them I WILL beat it. Once I beat it I will then change training sets to include higher efforts for shorter intervals… Probably 10 minutes @ 240w.

Did a bike test today.
The goal was to do the three churches loop in under an hour. I fell short crossing the line at 1:01:17 and 0.9km/h too slow but encouraged by the effort. I believe the power meter help red me a lot here. Had it not Ben for it I would have gone out much harder and most likely died at the half way point. As it was I decided that 200w was where my fitness probably; this seemed easy at the start and very difficult for the last 20 minutes.
Numbers were: 201w average, 209 NP, 35.2km/h
I think 220w would get me comfortably under the hour.
Tune in next week.

I’ll try it during the week.

The progression is as weird as the injury.
It’s painless when I wake up and is very sore when I step out of bed.
Throughout the day the pain varies.
I did a 50 minutes trainer set today and there was absolutely no pain whatsoever on the bike, and to add to the puzzle, there was virtually no pain for a couple of hours after the bike ride. Later in the day it was not bad at all. Blood flow helping somehow perhaps?
I swam in Ösbysjön with Magnus tonight. Similar to the other two times except this time I did some tempo efforts on the return leg of each lap. Only 38 minutes but solid training and more open water practise. 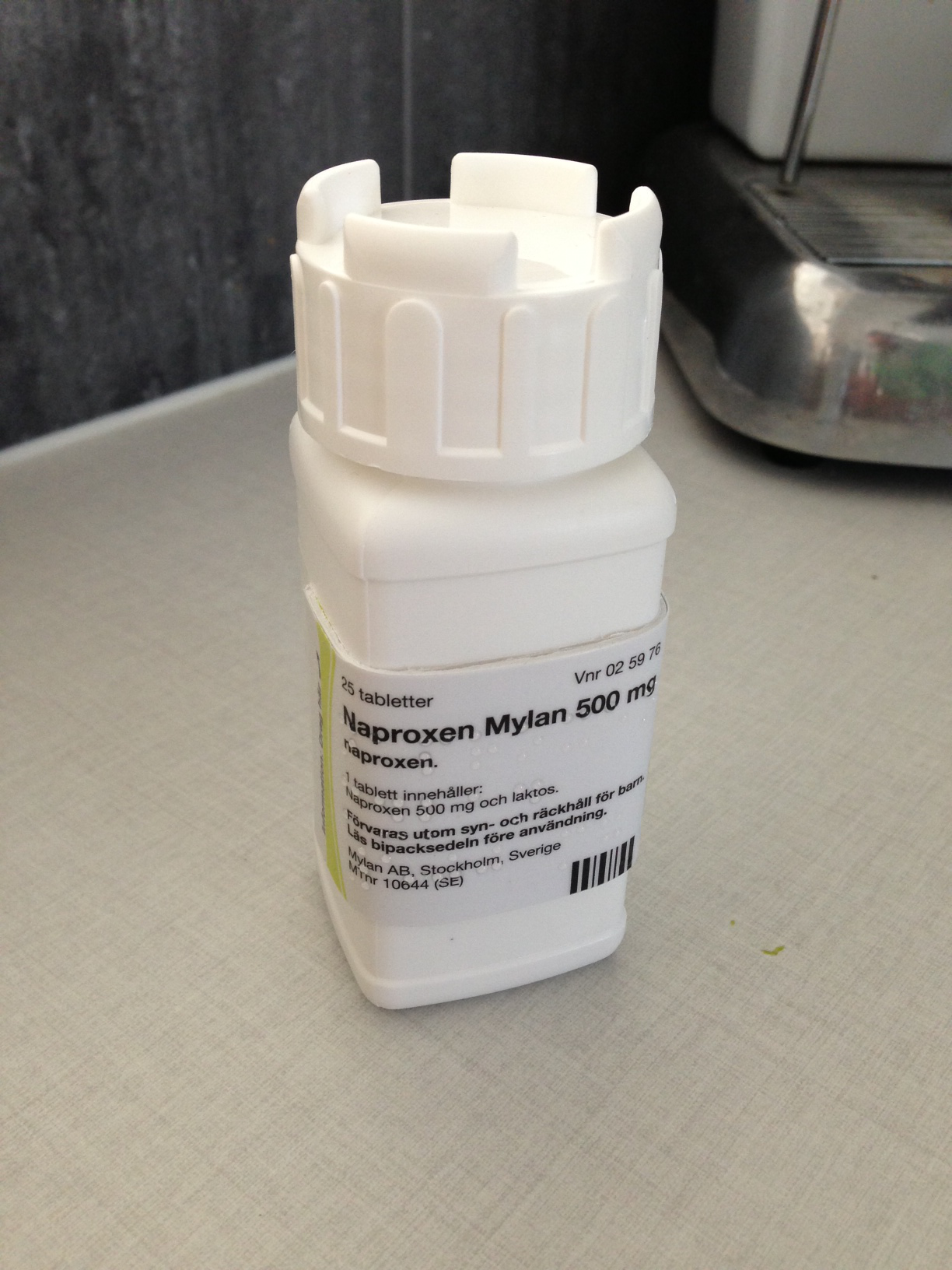 Taking these for the next 10 days!

After coming home from the race all was well – except I was quite tired. I carried on with my day and around three or four o’clock I had to walk down to teh local shop. I put on my runners and felt a slight pain on the outside of my arch on my left foot; nothing serious.

Next morning when I awoke I felt nothing… until I put weight on my foot. I could hardly walk! I noticed that after about five minutes walking the pain reduced quite significantly. The remainder of the day was spent in denial and upon waking up on Tuesday morning, where the pain was worse, I decided to get myself to the hospital.
Three X-Rays (for a suspected stress fracture) later I was released with the pills above and the following advice: “Take it easy.”
Upon asking when can I run again, I got the reply:”When it does not hurt”.
Can I swim or cycle? was answered with: “If it doesn’t hurt.”

With that pragmatic advice I went directly for a swim and discovered that there was no pain at all – even pushing off the wall.
Tonight I’ll try to cycle. Running is most likely going to be at least a week in the future. Not too bad.