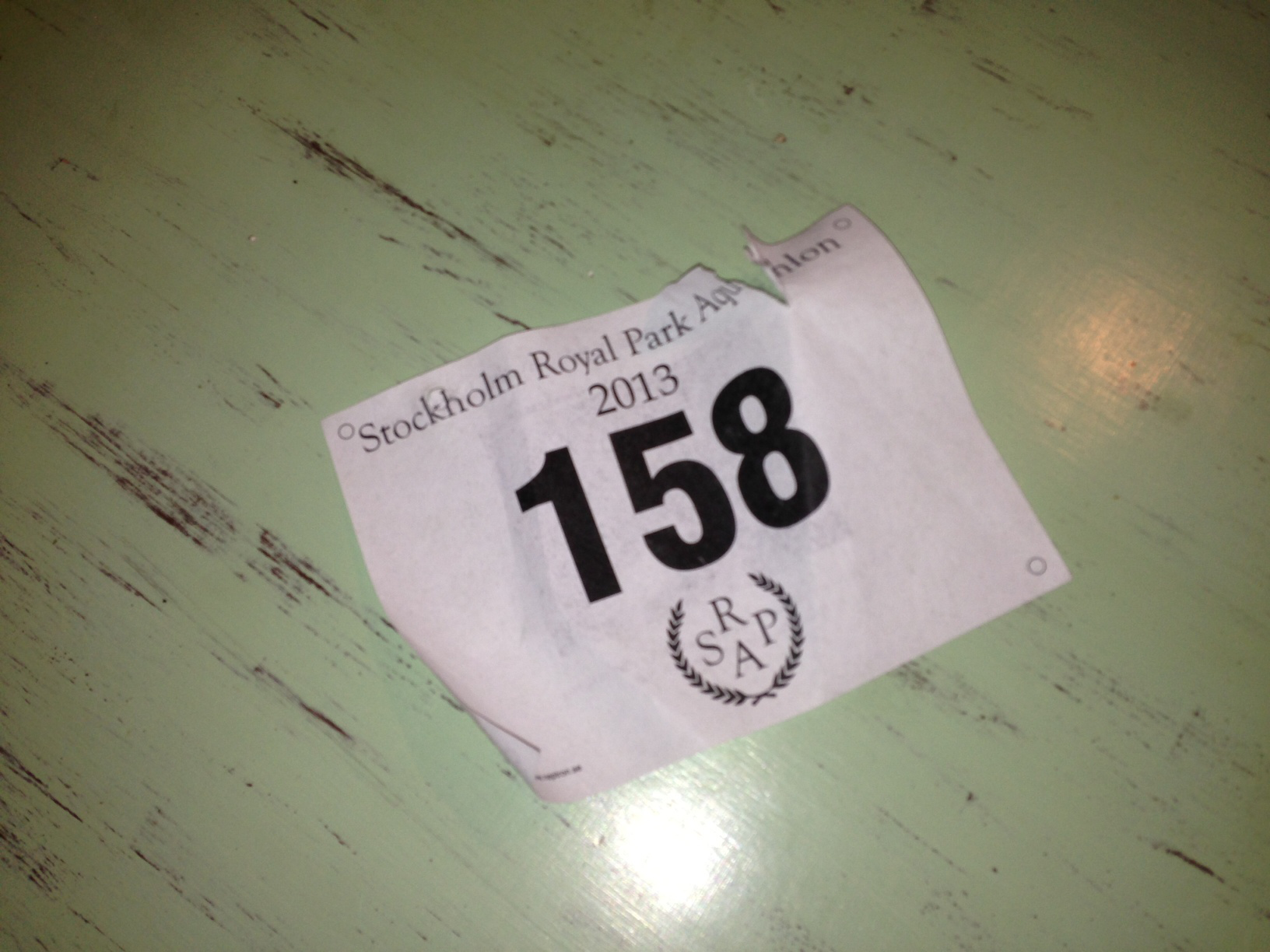 Stockholm Aquathlon is done – I am surprised how much I enjoyed it. I had my doubts about my ability to run after a 5km swim but they were well and truly laid to rest today. My swim fithess was not great but it was good enough to swim at a moderate pace for 5km. In fact, I could have kept swimming for quite some time, I felt so good in the water. Unfortunately my start was pretty bad and I lost the lead group pretty early. I still can’t decide if I let them go because I was afraid of the distance or if they just got away and there wasn’t a damn thing I could have done about it. The good thing is that I felt comfortable in the water – something I hadn’t done since I went into semi-retirement in 2007. In some way I can say “I’m back!”.

My pre-race plan was to take 5km to digest some calories and then hammer the last 16km. Wetsuit off, number clipped oo, socks and runners on and out I went and grabbed a drink. I felt so good that I thought that I’d just go for it. The way the race felt it seemed that the second lap was the best; my rhythm was good and I just felt fast. It seemed that I held this until 4km to go when it seemed that a switch had been flicked and the purpose of that switch was to make me suffer. It took some pretty creative mind games to keep going full bore because there was actually no reason to do so: there was nobody immediately behind and nobody ahead to catch. I convinced myself that I needed this pain for my next race and kept the pressure on until the finish.

Just 43 hours to the aquathlon.
I have been feeling very tired all week – as though I am coming down with something. I can only hope that it is noting that will prevent me from reaching the start line and carry on as planned.

The run will be very difficult but the right mindset can help here.
Think of it as the second part of a marathon, not the start of a half-marathon.
I know that I can take pretty severe pain for 70 minutes so I have to get some calories in for the first 10 minutes and then it’s hammer time.

There are some good swimmers in the start list so this should help me in the running; picking them off will increase motivation. Pass someone, focus on the next person in front and repeat.

Cruise the swim.
Hammer the run.
Prepare for suffering.
Enjoy!

Did a swim/run test tonight.
Approximately 2,7km swimming, a not so quick change out of the wet-suit and a 4km run.
No problems or surprises. Swim pace was faster than expected and I now feel that it is possible to run a sub-90 minute half marathon after the swim.

Decided to go swimming in the pool today despite the fact I had planned a lake swim later in the evening. I had an opportunity and took it.
I wanted to measure my fade over 3500m. The news was both good and bad:
Good: There was not much fade at all.
Bad: There was not much speed!
I have not trained correctly for this race – and that’s the fact I’ll take to the start line with me.
If the race exists next year -and I’m betting it won’t- I would need to add a mix of distance and short, fast swimming sets. The marathon training did not allow me to do that.
I’ll get to the start line and give it my all. That’s all I can give.

Was in Varmland for the weekend partying. Today, just before lunch and then driving home I managed to get a pretty nice run in.
13.68km, 4:18/km, 154 av. HR,
Was hoping for a late swim but it never happened. Hopefully Monday night.

The week is not working out as I had hoped.
That’s probably not all bad though since the plan was over the top – most likely due to a lack of confidence… and the lack of a plan.
I had planned to do a long run to work today but remembered that I had a meeting to attend so I had to adjust the plan on the fly. I tuned the run into a fartlek.
1km E, 4,4km M-Pace, 2km E, 2xHill repeat, some E and the last 5,5km @ T pace.
18,5km of solid running.
That got me to work 12 minutes before the meeting so after a quick shower I mad it on time – though still dripping sweat!
Now I need to try to get a long swim done and I’ll be happy to enter a taper.

Got a long swim done. It was not difficult but I see now that I’m not in 5km race shape. I can swim the distance at one speed – that’s all. No change in pace, no bridging gaps, nothing. It’ll just be a long splash to the end. Hopefully I’ll have good legs when I exit the water and will be able to pull off a sub-90 minute half marathon. Nothing to do now but wait and see.

After the race on Sunday I went swimming outdoors with my neighbor. Completely unplanned and very nice. He found a small lake nearby that is 150m across with a line dividing the lake in two; just perfect as a guide. I donned my new wet-suit and started swimming over and back until I had completed 11 out-an-back laps. Total was a tad under 3,3km.
Yesterday I had planned to run and to swim and then, when all that failed to transpire, I planned to bike in the shed. All plains were laid to rest – I decided that it would be best to rest up before the last little push towards the Aquathlon.
Today I’ll do my long run – It’ll be a late one.
Tomorrow I will try to get a 5km swim and a 10km run back-to-back.
That will be the main training done. During the weekend I’ll do some faster shorter sessions and maybe mix in some cycling next week. 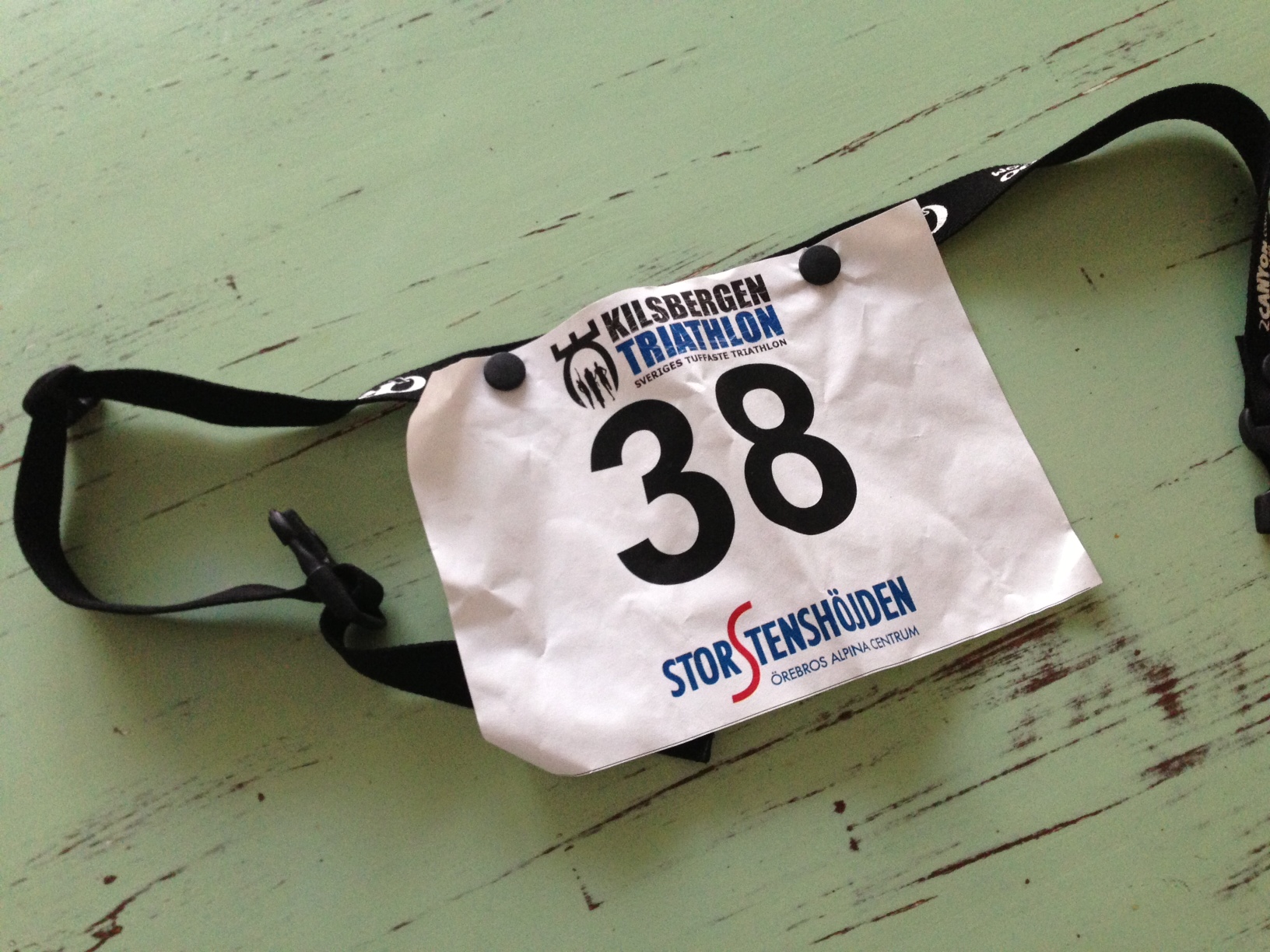 Finally got out of the starting blocks this year. Kilsbergen triathlon -dubbed as Sweden’s toughest Olympic triathlon- was the event, it was indeed tough and I am very happy with my performance. Pretty windy out there but all in all great weather considering how it was two hours before the start:

The plan going in was to hammer the swim, be ultra conservative on the bike and hammer the run. The success of execution could be considered as mainly a success. The gun went off and I swam with the lead group towards the first buoy. JUst after the first turn I started to get a little anxious and my breathing tightened up. I decided to drop back behind the guy who was causing me the most stress and just hang onto his legs instead. After I recovered my composure I found the pace far too slow and decided I’d come around him; unfortunately he (and me by default) had let a 10m gap open up to the lead group. I chased hard, felt strong but all my work was in vain – I not only didn’t catch the group, I didn’t even close the gap.

T1 was uneventful and the bike mount was less sloppy than Stockholm triathlon’s attempt last year. The first 4km of the bike leg was down the infamous 4km hill – seems easy. Being my first time on my new wheels – Planet-x 82/101s – and discovering the effect a crosswind has on such wheels for the could in normal cases be considered a stressful experience; experiencing this for the first time at 69km/h is just plain silly. I alternated between fear and laughter as I snaked my way down the hill. After the descent I had a plan to hold around 200w on the flat and add a few extra watts for the climbs. At times I caught myself pushing 240-250w on the flats and backed off. I pushed about 230-270w for the main 4km climb and 220-240w for ths smaller drags. Lap two was the the same as the first but with more controlled pace… I felt very good throughout.

I had heard and worried about the bike leg for the entire week and had assumed the run would be ok; nobody really talked about it so the assumption was there was nothing to talk about; Not in any way true!
The course was difficult. It dropped down for 3km on a mixture of surfaces before it transitioned a ski slope and then headed upwards. The elevation that had been lost in 3km had to be climbed in just 1,9km – It was very tough. I pushed on gaining back 4 or 5 of the places I had lost on the bike and I think I crossed the line in about 20th place overall. First in age group but there was only five of us so nothing too great to cheer about…
1500m swim, 44km bike, 10,5km run in 2:28 and some change.
It’s not a fast time but it’s a tough course and it far exceed the expectations I had placed on myself. Great day out and I can’t wait to race again.

Didn’t do a double last night because I got the opportunity to do a early run this morning instead.
I was tired last night and decided to go to bed early and set the alarm for 05:20.

I was out the door at 06:08 for what turned out to be a 20,15km run at a reasonably respectable 4:26/km.
With two sleeps until my first triathlon of the year, this could be considered unwise but the race is not my A B or C race… it’s just a race for the sake of it.
I’ll probably suffer – but that will have little to do with today’s run.

Definitely worth a try.

Tonight I will try to do a long run. 20-23km on mixed terrain; probably the lakes followed by the 10k Ursvik trail.