During my training for Dublin Marathon I had problems with my left knee.
My right knee is pretty tender now after yesterday’s run.
It wasn’t sore yesterday – pretty sore today.
This entry is mainly for historical reference: Right Knee pain. Day after 25,5km run.

The Long Run has not been done this week yet; that’s what my very immediate future holds.
Last night’s swim was interesting to say the least. There were non lanes out and we alternated swimming clockwise and anticlockwise in 10 minutes bursts.
I was pretty holding what I believed to be my 60 minute speed throughout the set and was pretty much over the limit with 10 minutes to go.
Tough set. Now to do the tough run… I’ll report back in 4 hours.

Run Done.
Got a little lost at the end – ended up doing a little over 25km. Felt good throughout though it was getting tough at the end – that could be partly the mental effect of an extra kilometer that I had no planned on. That or I’m just not that fit… Anyway – it looks like I’m on track. Over 13 weeks to Stockholm Marathon. I should be hitting 30km long runs 10 or 11 weeks out. I don’t think I have ever had my long runs going this long this far out from a marathon. This could be the year of a new PB.

So now my VO2 Max 3 minute interval becomes 295W
I wonder how many of them I’ll be able to do?

Here’s the details from today:

The day after my trainer set I did a pretty difficult treadmill run… just a variation of the usuall:
Start at

Made up a new trainer session today.
It was supposed to be called 3:3:3 but it turned out to be 3:3:2!
Quit the last session.
The idea was to train three power zones in one set:

Next time I’ll do the 3:3:3
It was very tough – perhaps 348 for a minute is too much at the moment… I never recovered from them.

I’m feeling a little tender in the knees today after yesterday’s long run. Disappointing but not surprising I suppose. As yet I don’t think it warrents a change in plan – I’ll just attend to it for the moment and keep on running. Reassess after my next long run.
Tonight’s plan is a swim with the option of bailing; let’s see what transpires.
Here’s the planned set:

The 2×20 bike session is difficult. So difficult that I cancelled my Sunday run.
The pain just creeps up on you and it’s on top of you before you know it.
The first 20 minutes are ok – a slow journey from comfort to a pleasing tiredness.
The two minutes recovery serve only to remind you how far from comfort you actually have travelled.
Starting out the second 20 minutes from recovery is not a pleasant experience that never seems to get easier.
10 minutes to go is where I feel I have to dig deep to hold the effort.
Last 5 minutes -while extremely tough- are after all only 5 minutes; nothing compared to the 35 minutes you have already done.
Warm down is a relief.
Next day will not be a hard one.

So I’m 1,87km ahead of plan.
This leaves 6-7 weeks of race specific training. Never managed to get that done before… Could be a good year. 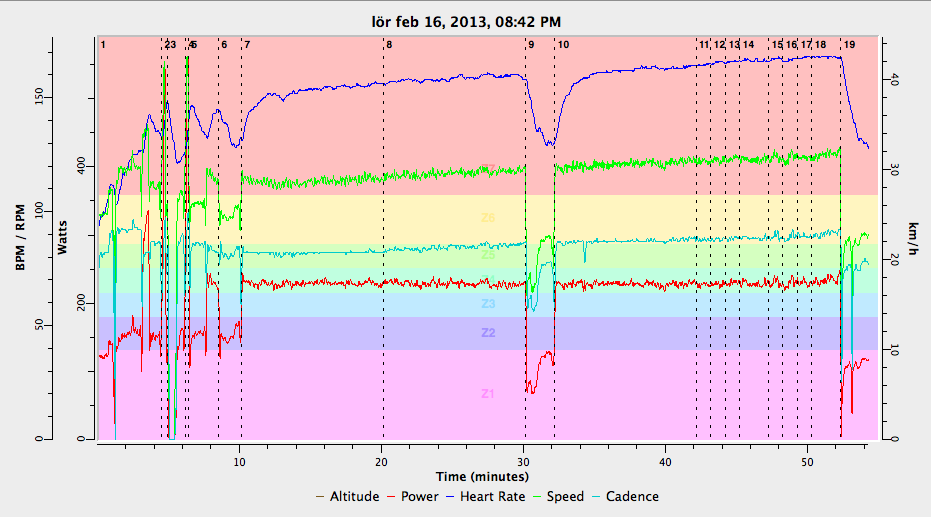 I wonder if a long run tomorrow is pushing it a little… I’ll judge it tomorrow. There is the possibility of doing the long run on Monday instead.

After a slow start, I’ll be finishing the week pretty strong.
Last night’s swim was tough. Very little rest between a mix of distance and speed sets. I was pretty bashed up after it.

Run done. It was difficult. Marathon heart rate is 165; I crossed this after 34 minutes running.
Done for the day now. Next run is the long one on Sunday.