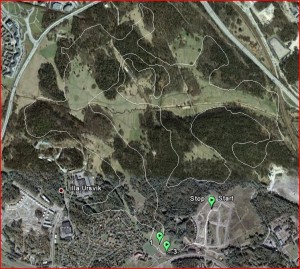 I gave the mile a go tonight. I had predicted that I could do 5:20 on current fitness, unfortunately for me that was not the case: I crossed the line in 5:27. I had a little pick-up in me on the last lap and based on the experience alone I could probably run 3-10 seconds quicker… only trouble is that I don’t particularly want to try it again any time soon.
I’ll try to squeeze in a long run tomorrow and maybe tackle the mile (or some other distance from Don’s league table) over the weekend.

I didn’t have time to run on Sunday and today was going to be the same, so I made use of the only spare hour I had today and ran 14km. The middle 10km was on the usual trail and was ran in 45:33 w/ 155 av. HR. This surprised me a little since it felt a lot faster than Saturday’s run; that’s the way it goes I guess.

See it I can squeeze something in tomorrow.

Not a bad session however the numbers don’t show the effort that was required. There was no pain or discomfort as such – there was just no flow; my stride felt messy and inefficient. Better than Tuesday but not yet great.

Nice MTB ride over lunch. My third time on the course and I’m getting slightly better and am enjoying it much more! Fitness is desperately lacking and this showed after about 40 minutes where my legs were fried – There was a rather long hill after which I never recovered.

Now, should I run tonight too?
If so, should I do the XTreme or just the 10k?

Did a completely different run than planned: a dead-man’s run. I should have guessed it would be so. Since I train so infrequently, I am usually like a greyhound in the slips – buzzing around the house waiting for my opportunity to go out and run. Tonight was a little different: I was looking for things to do so that I would not HAVE to go out and run. Eventually at 21:30 I headed out the door and started to run. I felt great and decided that I would run the 10km trail, making it a 12km door-to-door trip. I hit the trail after about four minutes and take in the first hill. 3km later the trail splits: straight ahead to the 10km trail, right the 15km XTreme. I decide that I will take the XTreme route only until it intersects the 10km trail again; thus adding about 1.5km on to my night’s endeavors.
Still all is well. Suddenly, about 3-4 minutes after I deviated from my planned route I started to feel bad… very bad. Legs did not want to turn over, HR very low relative to perceived exertion and an unending desire to walk. I decided to plodd on and suck it up. 7km into my run I took a short cut home, leaving me about 3.5 km to go. 5 minutes later I saw annother short-cut and took that one too. I did manage to pick the pace up in the last km but all in all it was a disaster: 9.1km 45 minutes – probably my slowest solo run in 5 years.

Now comes the debate: do I try again tonight or rest a day?

7km easy pace – nothing more to say.
Left foot feels a little tender after the track session on Friday: seems like a muscle, but I’ll continue to track it.

Busy with the house and family: managed to squeeze a MTB ride in on Saturday and nothing else since then until today. I did a 9km run during lunch: Easy pace. I’ll go out again tonight and do another run: First ‘double’ in quite a while. Hope I can survive it… I also plan to get on the bike tomorrow. I’m not sure if it is actually possible, but the plan still exists nonetheless.

12 minutes run to and from the track.
25 minutes sauna.

…is what was in contact with the ground for a significant amount of time during my MTB première this year.
I am sadly lacking in both the skills and fitness department – If I had either one of these assets I would have been fine. My back, legs and neck feel tired now; and all after 59 minutes on the bike! It’s time to start making time for cycling…